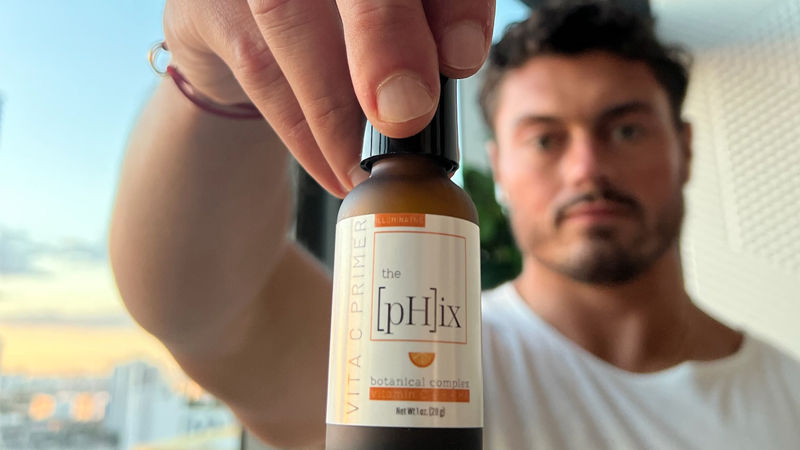 It’s about feeling comfortable in your own skin

Motivated by love for his mother, this entrepreneur created skincare whose ingredients are confidence and transparency.

Brendan Aker is no stranger to feeling uncomfortable in his own skin. As a gay man who grew up in a Catholic family, suffered from rosacea from an early age and pursued a career in the very straight, male-dominated field of finance, he had feelings of self-doubt that followed him for most of his life.

Canceling dates, sitting out dances or declining social events because of skin flare-ups or his own self-consciousness were common occurrences. He learned to live with it. But when his mother was diagnosed with cancer and experienced serious skin issues from the treatment that left her feeling less than herself, he couldn’t just stand by and watch. As fate would have it, it wasn’t until he helped his mother that he ended up helping himself and so many others who have suffered silently for years.

Aker didn’t have a background in science or a lot of capital, so he tapped into three things he was rich in: his passion for research, an amazing network of connections and a relentless drive to help his mother.

“Unless you’re blessed with a lot of money or a lot of luck, you need to love what you’re doing to make something succeed.”

Rolling up his sleeves

He started by doing a deep dive into the skin care products already on the market and quickly had a realization: Most were overpriced, all promised bold claims with little to no backing, and unless you were well educated on the ingredients and their interactions, you basically had to try them and hope for the best. So he took everything he’d learned, as well as the connections he’d made with professionals in the skin care industry, and developed his own line of products as well as a platform to educate consumers to feel more confident in their journey.

“I felt like I was paying rent when I should have been paying a mortgage because I was buying into so many other people’s products, and it turns out many had conflicting ingredients,” says Aker. “I couldn’t understand how these big companies got away with that, when even early on in my skin care research, I could see the issues. So I wanted to make a change and ‘phix’ the predatory industry.”

Two years later, Aker now sells a line of inclusive and 100% organic skincare products appropriately called the pHix, pronounced “fix” and spelled that way because of its high pH content. And he discovered that his products helped his mother and many others, including Aker himself, enjoy their lives again.

“That’s all I want to do for people — to help them feel good, and not in a vain way,” he says. “But you wear your skin every day, and I think people find it easier to express themselves and do good things when they feel good about themselves.”

“You wear your skin every day, and I think people find it easier to express themselves and do good things when they feel good about themselves.”

Putting himself out there wasn’t easy for Aker, but overcoming obstacles his entire life has made him stronger. “I was so self-conscious my whole life that I was scared to do anything on my own,” he says. “At first, I was so in my head about everything that I had trouble giving presentations or even speaking to dermatologists. But I realized if I didn’t do this, no one else would. So I learned to suck it up. And it turns out that the thing I grew up so self-conscious about — being gay — has been my greatest asset next to my incredible support network.”

The friends Aker made in the LGBTQ community helped him become comfortable with the way he acts and speaks. And he believes he’s a much better person for it. “Being gay has helped me overcome so many hurdles that I don’t think I would have, because it has afforded me a lot of empathy and an open mind,”  he says. “So my advice to others like me is to feel comfortable in who you are, because it’s 1,000% going to be your strongest asset.”

Aker’s relationship with Chase began when Isabel Hegel, a senior business consultant with the bank, purchased his products on Instagram. She was so impressed with the quality of the products and his story that she reached out. Aker has been a loyal Chase customer ever since.

“The fact that she reached out to me probably changed the entire trajectory of my company,” Aker says. “She’s like my fairy godmom. I have so many gaps in my knowledge about running a business and funding a business. Isabel answers any question I have anytime, even weekends. Everyone I’ve spoken to at Chase has been incredible. It doesn’t feel like I’m banking. It feels like I’m working with people who are interested in seeing me grow. I hope everyone in my shoes finds an Isabel, because it’s so important.”

In addition to the business support he receives from Chase, Aker is also very grateful for the support Chase shows the LGBTQ community. “You could hire a thousand LGBTQ members, but if they’re just thrown in the workplace and discriminated against silently, it’s not going to make a difference,” says Aker. “That’s what I love about Chase. They don’t just put an emphasis on hiring people of diverse backgrounds: They give them the tools they need to feel comfortable in the workplace. That’s the most important thing ever.”

Aker is still working full time while getting his business off the ground, and he acknowledges he couldn’t do it without the two most important people in the world to him — his mother and father. “I don’t know how I would have kept this up if I didn’t have those two. I wouldn’t have been able to keep my other job,” he says. “They’re helping me fulfill the orders. Hopefully soon, as we grow, the three of us won’t be doing all the work.”

Today, Aker’s mom feels great. “She feels like herself again. I think she’s also learned to love life a lot more,” Aker says. “This was definitely one of those life-is-short, a-ha moments. An experience like this really changes your perspective on life and what is and isn’t important. In the end, it has definitely brought us all closer together, accepting each other on a much deeper level than ever before. And it was the catalyst for this brand that I hope helps and inspires so many others.”

Aker no longer sits on the sidelines of life. And, thanks to the pHix, neither do so many others.