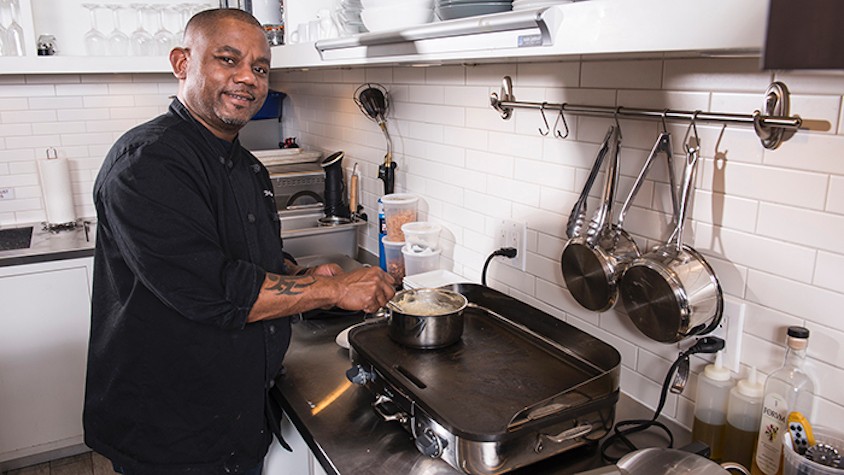 In Harlem, a chef starts small – to go big

This is the latest installment of The Pursuit, a series in which small business owners share insights on how they build their enterprises—and follow their dreams.

Like many chefs, Darryl Burnette has long dreamed of owning a restaurant. He hadn't anticipated that it would be quite so small as Belle Harlem, the 275-square-foot sliver that he and his wife, Melissa, opened in October 2016.

Burnette, 45, has worked in large New York City kitchens like Bergdorf Goodman's BG Restaurant and Jean-Georges Vongerichten's Spice Market, which served some 600 people a night in a vast multi-story space. At Belle Harlem, Burnette has only 12 seats, with the kitchen directly in front of guests, giving a terrifically intimate view of how food is prepared. 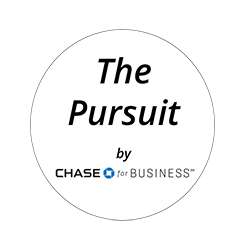 "I'm a chef but I've also bartended, waited tables, washed dishes. If you understand every aspect of the business, the next step is owning a place."

Burnette and Melissa—who during the day works as a fashion company's director of product development—have lived in New York City's Harlem neighborhood for eight years. They have seen tensions arise between longtime African-American residents, and new arrivals moving into gleaming condos. Located around the corner from the historic Abyssinian Baptist Church, Belle Harlem aims to be a spot where people from different parts of the community can start a meaningful conversation.

In the following interview, Burnette shares why Belle Harlem's diminutive size is actually an asset, what he's learned from more than a decade in the restaurant business, and how he continues to pursue his dreams. Here's an excerpt, edited and condensed for clarity:

Chase: How long have you thought about opening a restaurant?

Burnette: My first career was as an architectural draftsman. But I grew up cooking with my grandmother in Virginia, and have always loved the process of perfecting and reinterpreting dishes. When I saw [Ethiopian-Swedish chef] Marcus Samuelsson on the Food Network, I thought hell, "If he could do it, I could do it, too." I decided to focus on cooking, and we moved from Virginia to New York, so I could go to the Culinary Institute of America. My goal was to have my own restaurant.

Chase: What did you learn from working in New York restaurants?

Burnette: I learned a lot working for Chef Andy D'Amico, at the restaurant Nice Matin. He taught me speed, and how important it is to do a good brunch, because it's so profitable. And being a business owner has made me rethink some things. Chefs complain when someone orders a well-done steak. You're thinking about the integrity of the dish. As a business owner, I say, "No problem." I'm focused on what the customer wants.

Chase: What made you decide to open in a small space?

Burnette: At first, I wanted a larger place. My wife said, "Slow down—you don't need to do a 50-seat restaurant. We can do a 12-seat restaurant, be more hands-on, and make it more intimate. And have a better quality of life." One of the worst things about working in the restaurant industry are the long hard hours. When I was working for Jean Georges, sometimes I would get home at 2 o'clock in the morning, and have to be back in 6 hours. My days are so much better now—we close at 11.

Chase: How did you finance your business?

We didn't have a lot of money. So we had to be smart. We got a small loan, like $10,000, from a bank. We proved to them that we could pay that back—and they believed in us, and our business plan, and eventually gave us a bigger line of credit. Luckily, our apartment has done very well with the market here in Harlem. So we refinanced our apartment. Looking back on it now, I'm kind of glad no one gave us a big loan, because I don't think we were ready for it. We needed something small. 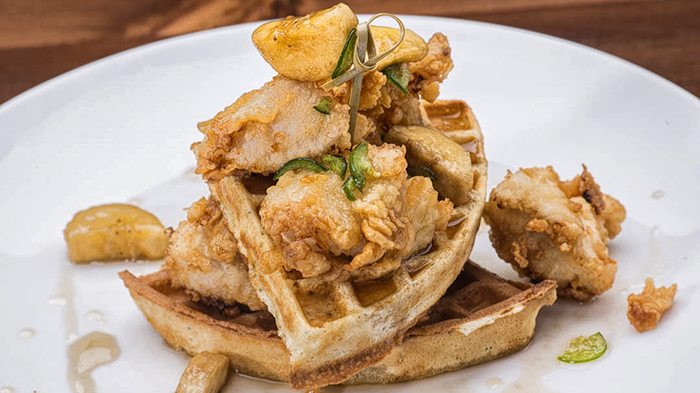 Chase: What was your inspiration for Belle Harlem's concept?

Burnette: I thought about those perfect, small food spaces in Japan that have one chef, and four seats, and that only makes four things each day. Melissa and I would have dinner parties, and I always thought, why not recreate this as a business?

Chase: Were you involved in Belle Harlem's design, given that you're an architect?

Burnette: Yes. An owner who doesn't cook will put the chef down in the basement. I wanted to be able to enjoy myself and see the sun.

Chase: What are some of the benefits to owning a small restaurant?

Burnette: I get to interact with the customers, and people interact with each other. They're having great conversations. We designed Belle Harlem to feel like you were in our home kitchen.

Chase: What's been the feedback from the neighborhood, which until recently didn't have many relatively high-end restaurants or gourmet grocery stores?

Burnette: It's been great. We get a good mix of people from new and old Harlem. People are happy to see that someone feels that Harlem deserves great service, wine, food—and, most importantly, hospitality. We were so over having to leave our neighborhood to experience these things. 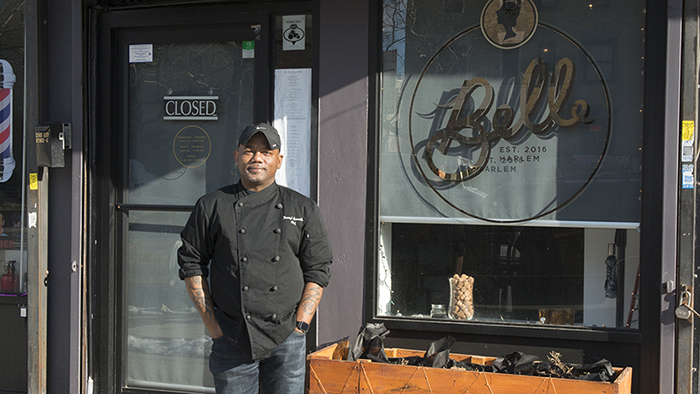 Chase: What have you learned from interacting closely with customers?

Burnette: At first we tried a set tasting menu, but folks said they wanted the freedom to order what they wanted. Also, who's going to spend $100 a night on food? We decided to break the menu into small plates for sharing.

Chase: How do you make it work financially?

Burnette: We have extremely low overhead. We have a very affordable rent and we do everything ourselves. It's just me, Melissa, and my sous-chef, Carlos. I cook, serve, do the books and marketing. One of the reasons we bank with Chase is it allows us to easily integrate our payment and bookkeeping systems. It connects directly to QuickBooks, which I'm still learning. We keep a close eye on our profit and loss.

Chase: Is there anything that gives you an edge in this business?

Burnette: Melissa and I are both strong believers in learning how to adapt. We both had a lot of experience in the hospitality industry —She waited tables for 15 years. I've bartended, waited tables, and washed dishes—so we kinda knew what to expect. When we decided to go for it, we were in it 100 percent. But we didn't bite off more than we could chew. We're also very hands-on. As a business owner you have to be hands-on because no one's going to take care of it as well as you will.

Chase: What do you see your business looking like in the future ?

Maybe when we get a little more successful and get a better name for ourselves we could do other projects here in Harlem and then keep Belle Harlem but as a tasting bill. I think we've really nailed that feeling of being at home. We could expand to do some other concepts. I'd like to see a small Belle in airports. And maybe a Belle Tulum [Mexico], so we can just relax.

Chase: What advice do you have for small business owners?